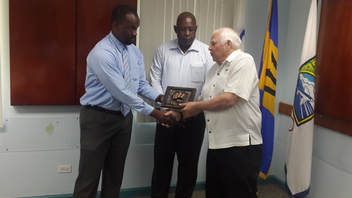 Taekwondo Barbados makes presentation to Barbados Olympic Association
released 29 August 2017
BRIDGETOWN, Barbados (22 August 2017) - On Tuesday, 22 August 2017 at the Barbados Olympic Association's meeting with National Federations, BOA President, Mr. Steve Stoute was presented with a gift from the President of the Taekwondo Association of Barbados, Mr. Henderson Turton, to acknowledge appreciation for the efforts made to assist Taekwondo.
Mr. Turton highlighted the BOA's recent sponsorship of him to allow Barbados' participation at the recent (June) events held in Muju, South Korea during the 23rd World Taekwondo Championships including:
The item presented was specially hand-crafted in South Korea by an onsite Craftsman at the Taekwondowon Arena. It showed a fist which was representative of Taekwondo and carried a framed brass finish. The hand used for the mould was that of President Turton and was considered  perfect for a special stand-out token of appreciation from the Taekwondo Association of Barbados.

Barbados' participants in the Championships placed the country in the top third in the July 2017 World and Olympic rankings of the Men's under 8okg category with their efforts.