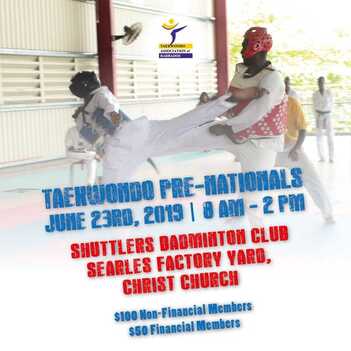 Registration is now closed for the 2019 Pre-Nationals (Kyorugi) Competition! 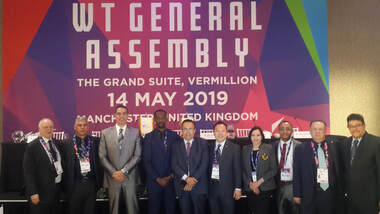 Here, President Turton stops for a photo with some of the other MNA Leaders from World Taekwondo Pan America (PATU Presidents)
Barbados represented at 2019 World Taekwondo General Assembly
14 May 2019
MANCHESTER, United Kingdom - Mr. Turton first wore his Presidential hat in representing Barbados at the General Assembly for World Taekwondo MNA Leaders. It took place the day prior to the start of the World Championships, and important decisions were agreed during the meeting whilst leaders were updated on happenings in and around the World of Taekwondo.
​The overall outing facilitated furtherance of relations with International counterparts as the President continues to engage the International Taekwondo community as part of the developmental process for Taekwondo in Barbados.

Senior Taekwondo Athlete, Mr. Askia Alleyne (l) and Taekwondo Association of Barbados President, Mr. Henderson Turton (r) on their departure to the World Taekwondo Championships and General Assembly, Manchester England 9th May 2019.
Barbados to Participate in 2019 World Taekwondo Championships, Manchester, United Kingdom
14 May 2019
BRIDGETOWN, Barbados - ​Barbados’ Men’s number 1 ranked Senior National Taekwondo Athlete, Mr. Askia Alleyne and Taekwondo Association of Barbados (TAB) President, Mr. Henderson Turton, departed Barbados on 9th May to Manchester England, to represent Barbados at the World Taekwondo (WT) Championships and General Assembly meeting. This event runs from the 14th to 19th May. The Bi-annual event is highly prestigious and is ranked second only to the Olympic Games in the world of Taekwondo. It enables athletes to compete against the best from all around the world and thus enables them to improve their World and Olympic Rankings.

It will be the first time that Mr. Alleyne will be competing at the World Championships. In 2017 he participated in the WT Championships Training Programme in Muju, South Korea. Mr. Turton will also wear the hats of National Coach/Manager for Mr. Alleyne in Manchester and he will also once again represent Barbados at the WT General Assembly meeting.

Mr. Askia Alleyne is the reigning National Champion and has been Barbados’ number 1 ranked senior competitor for several years. He will be competing in the 87+ Kg weight category. His matches are scheduled for 19th May. This level of competition will be a good international competition experience for Mr. Alleyne.

Prior to their departure, President Turton expressed his pleasure with the present state of conditioning of the athlete. He noted his satisfaction with the national team's preparations generally and the preparation of Mr. Alleyne in particular.  Mr. Turton further explained that Mr. Alleyne had recently participated in the Pan Am Games Qualification Tournament in the Dominican Republic following which Barbados was awarded a Wild Card placing for the Pan Am Games later this year.

The significance of this Pan Am Games qualifier outing and the result, to enable participation at the Pan Am Games in Lima, Peru, in August 2019, demonstrated that the quality of training received through the TAB recognized clubs, was at a level that can foster a path for our national taekwondo athletes to actively compete on the international stage. This is something that Barbados was known for several years ago and through the hard work of the Association, it shows "Barbados is back!" He was happy that Taekwondo in Barbados was once again formally engaged in the formal Olympic Cycle having missed out on the process in the past.
​
President Turton further opined that the exposure for Mr. Alleyne at the WT World Championships will also provide much needed international competition experience and exposure in the lead up to the Pan Am Games this coming August in Lima, Peru.